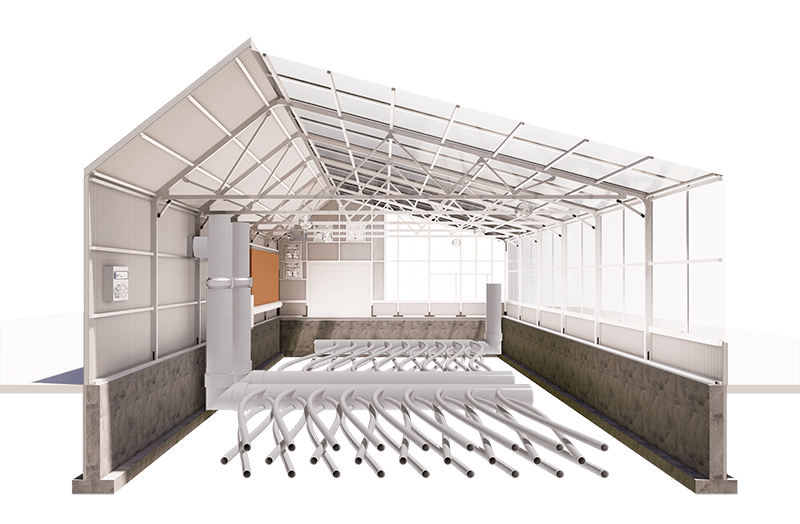 A Ground to Air Heat Transfer system– also called Earth Tubes, Earth Battery or a Climate Battery – is a low-cost method for heating and cooling your greenhouse year-round using only the sun and the thermal mass of the soil underground. For more info on how it works, see our GAHT® page here or watch, A Geothermal Greenhouse.

A GAHT® system is relatively simple to build and install if you have the right plan in place. Creating the plan and knowing what to do, however, can be more tricky. In many cases, small mistakes in the design or install can render the system ineffective, causing the time and energy you put into the project to be wasted. Moreover, a poorly designed system will prevent your greenhouse from operating energy-efficiently and growing to its full potential. For this reason, at Ceres, we offer designs, materials lists, and installation instructions for our DIY GAHT® systems to help people avoid common pitfalls and create the most energy-efficient, cost-effective greenhouse possible. We also customize our GAHT® plans for your greenhouse, ensuring that the system is sized and designed properly.

Once you know what to do, the purchasing and installation of the components is straightforward. Please see our GAHT® page for more info on our GAHT® design packages.

While all avoidable, these are common pitfalls that can derail a GAHT® system (climate battery, earth battery greenhouse):

How much energy you can store underground all depends on how much air is moving through the soil. In most cases, the heating and cooling capacity is directly proportional with the amount of air movement. Thus, it’s important to use fans that are powerful enough for your greenhouse. However, you don’t want to go too large: At some point, additional airflow will not yield additional heat transfer and the fan power is wasted. In other words, there are diminishing returns when you increase the GAHT® fan size above a certain threshold. Fan sizes and sourcing information is included in our DIY GAHT® system design package. 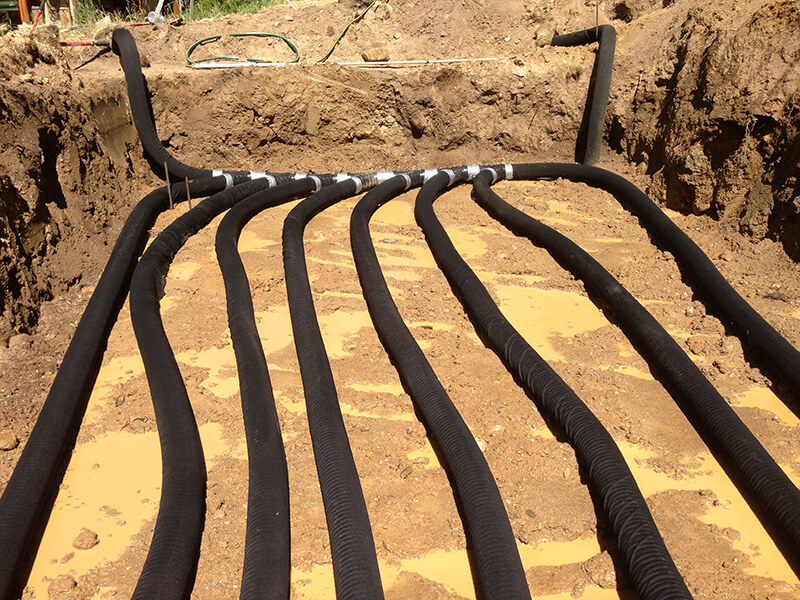 The diameter of the underground tubing or pipes should be correlated with the amount of air moving through them. If air is blowing through a pipe that’s too small it will create resistance, which will greatly reduce air-flow and damage the fan over time. If the pipe diameter is too large, there will be enough air flow but heat transfer will be diminished. This occurs because air movement changes from a turbulent flow pattern (more chaotic) to a laminar flow pattern (more linear). Laminar flow will reduce heat transfer.

Knowing the depth the greenhouse pipes should be buried is also important. At Ceres, we often recommend burying pipes 2′-4′ below grade in order to get the pipes deep enough while still being above the water table. In some cases, when people design their own systems, they bury the pipes just 1-2′ below ground. Too shallow of an installation reduces the total mass of soil that the GAHT® system can use to store heat. Shallow installation also prevents the greenhouse tubing from reaching the stable temperatures of the soil deep underground.

There are several different ways to layout the sections of pipe underground, either forming one or two layers, a single connected system, or multiple separate systems. The graphic above displays two layers, each forming its own independent system with its own fans that can be operated separately. Therein arises another variable: the length of the pipe, or distance between where the air comes in and where it is exhausted back into the greenhouse.

If the underground GAHT® pipes are too short, there will not be enough time for the air to fully transfer heat to the soil, or for the soil to transfer heat to the air. Heat exchange is greatly reduced. If the pipes are too long, most of the heat exchange will occur over the beginning distance of the pipe system, heating that part of the soil more than the rest. In addition, trying to pump air through too long a pipe will reduce the airflow coming out of the system.

Air can leak out between connections in the pipes if they are not properly sealed. This reduces the airflow going through the system; less air will come back into the greenhouse.

While you want water to be able to exit the pipe, you also don’t want dirt or bugs getting into the pipes and clogging them. We therefore use drainpipe that is covered with a thin layer of cloth, and cover exhaust pipes with chicken wire if they are close to the soil.

Some people use inline fans that run off DC power so the system can be connected to a solar panel. While a nice idea, we’ve found these fans don’t do well in humid environments and fail after only a year or two. 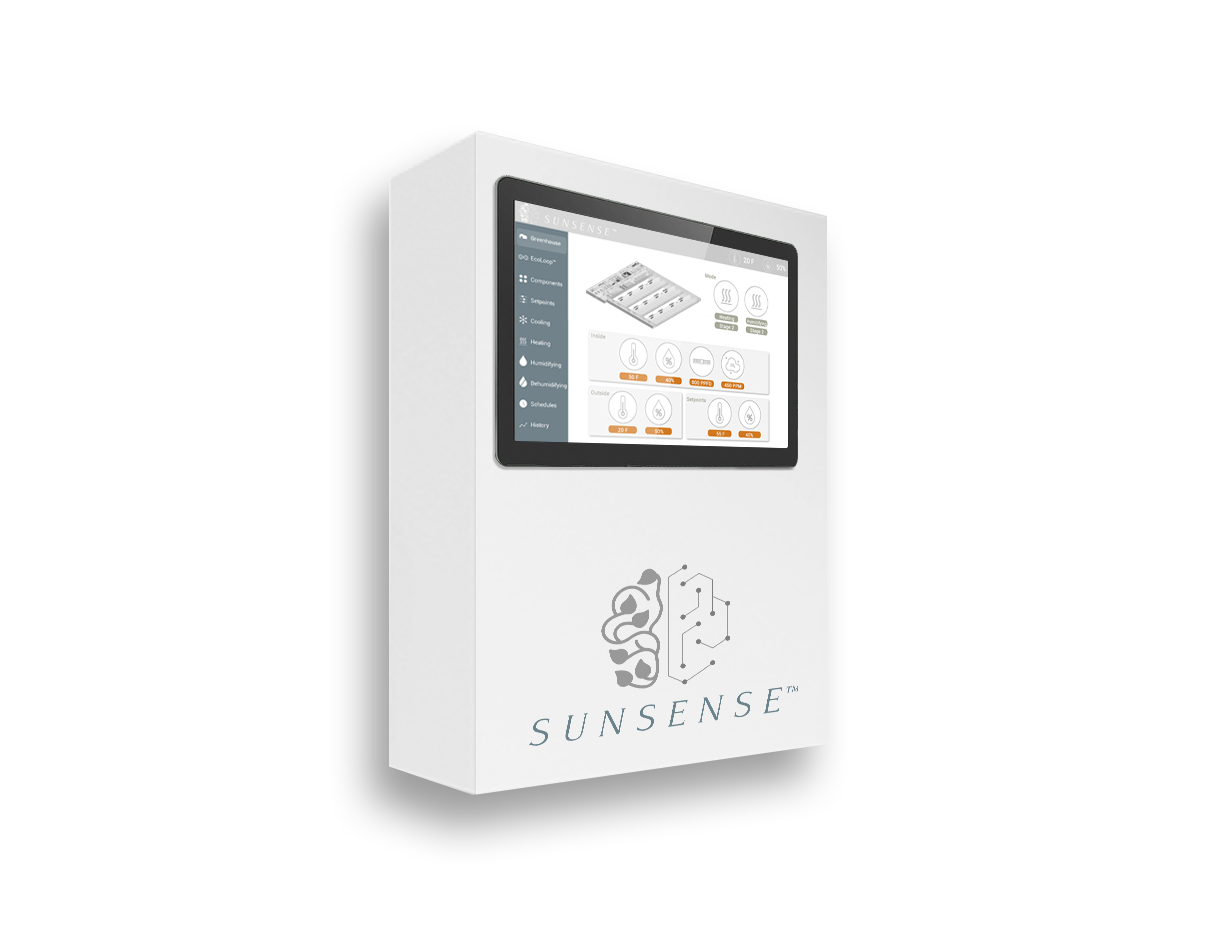 With the Ceres SunSense™, controller sensors monitor temperature levels in the greenhouse and then the system will turn on the GAHT® system to achieve climate settings programmed into the controller interface. The added benefit of the controller is that it can operate all your other environmental control systems in conjunction with the GAHT®. This allows for more precise climate control as you can program a sequence of specific operations to occur to create a stable environment. Increasing the precision in your greenhouse, increases the efficiency. If you’re only using the heating and cooling you need, you’re lowering your energy usage and operational costs.

For more information on the capabilities of The SunSense™, check out 4 Benefits of an Automated Controller in a Vented Greenhouse.

Now that we’ve covered the “don’ts” of GAHT® installation, let’s get into the “dos”.

As we’ve described in the above points, these three variables all interact to determine:

At Ceres, this is where all of our work designing these super energy-efficient climate systems comes into play. We use a combination of past case studies and energy calculations to design a GAHT® system that is tailored for an individual greenhouse. This means the right components are chosen so the system has enough heating / cooling capacity for your climate and greenhouse size. In some cases, a GAHT®  system needs some back-up heating and cooling, and we plan those in too.

All of the materials used for your DIY GAHT® system can be purchased online or at a hardware store. Though they are off-the-shelf components, materials should be selected carefully to ensure ease of installation and durability. At Ceres, we’ve curated our materials so that parts can be installed easily, replaced if needed and will last in this application. We use greenhouse fans intended for high-humidity environments and durable pipes that can be buried underground. This allows the best of both worlds: if a part is damaged, it can be easily replaced, however parts will likely last for decades. We also take care to ensure that parts can be installed quickly and easily by ordering materials in the right sizes. Very few tools are needed for installation.

A final consideration is the noise of a GAHT® system. Running large fans creates a low hum in the greenhouse that can be annoying if it is close to your home. For this reason, we’ve selected quiet, small greenhouse fans for the airflow they provide, and offer speed controllers so the fan noise can be manually reduced.

If you’re considering a Ground to Air Heat Transfer system, climate battery, earth battery, or earth tubes to heat and cool your greenhouse year-round, get in touch with us to learn more about how to optimize your system and maximize your investment.

How Do I Control Humidity in My Greenhouse? 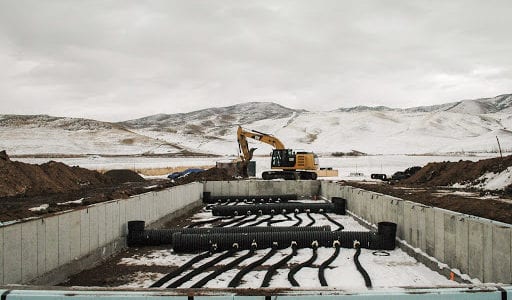 Adding A GAHT® To An Existing Greenhouse

Using Ladybugs in the Garden and Greenhouse