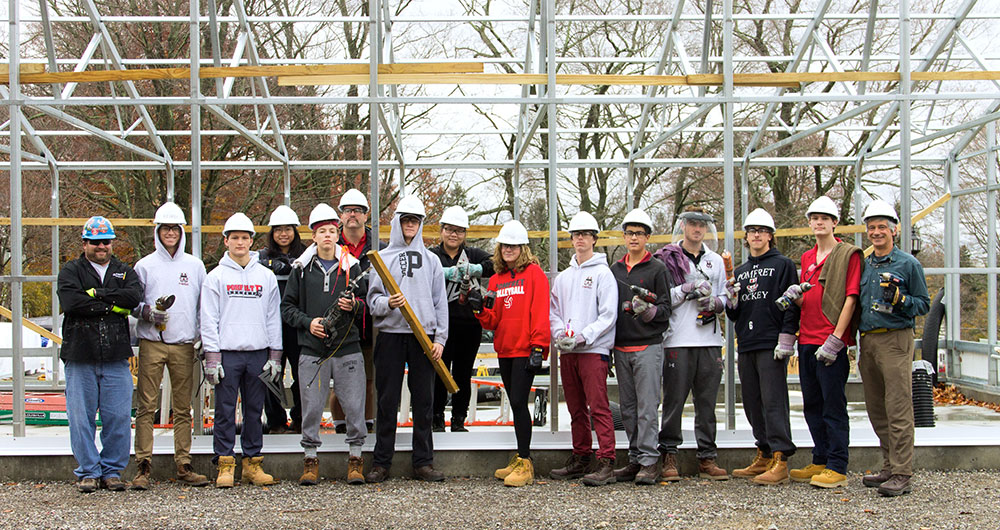 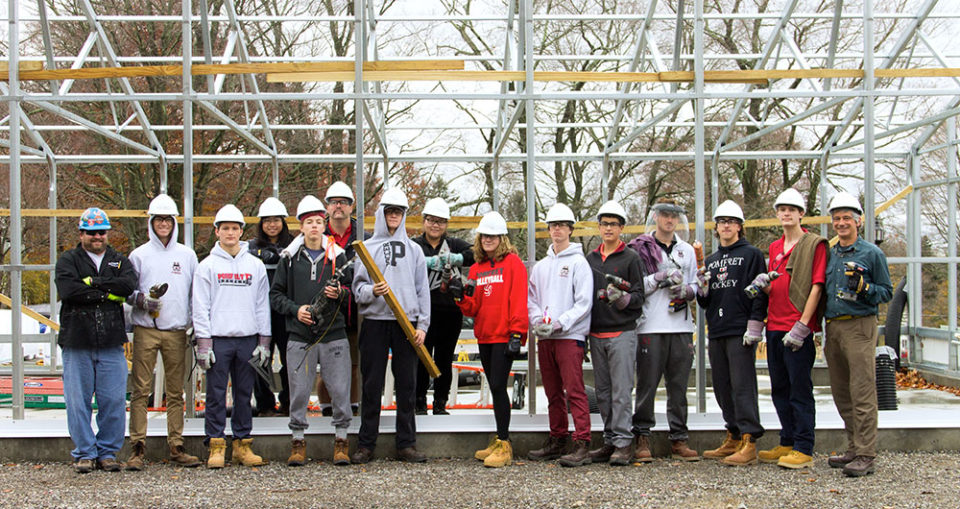 Building a year-round school greenhouse is a significant endeavor. Using passive solar greenhouse design, the north wall is insulated, and glazing slopes strategically to maximize solar gain and reduce the dependence on fossil fuels. The structure is engineered for any snow or wind load, making a durable greenhouse much like building a commercial building project.

While the benefits of a year-round learning garden are unparalleled, the planning and construction process requires significant time and effort. (For more this process, see our blog: 6 Tips for Creating a Year-Round School Greenhouse.) General advice is helpful, but often seeing how a single project evolves can elucidate the path to success. This blog serves as a case study for the Pomfret School Aquaponic Greenhouse, also known as The Helios Project.

Mission: A Year-Round School Greenhouse that Gives Back

The Pomfret School is a private high-school in northeastern Connecticut. The goal of the 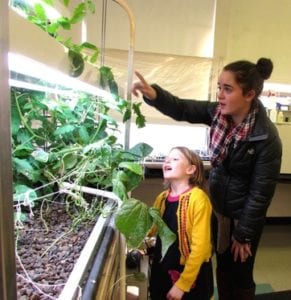 greenhouse is to support hands-on learning in science and engineering, as well as teach kids how to grow food. Simultaneously, it will grow fresh organic food for Pomfret School’s dining hall and a local food bank. A final role is to build community, by allowing students, faculty and community members to plant and tend crops together. In this way, the greenhouse serves a number of roles: part lab and classroom, part production greenhouse, and part community greenhouse, it will benefit the school and larger community in a myriad of ways.

Science teacher Bill Martin originally had the idea for a school greenhouse that could incorporate aquaponics. Per the above, Martin envisioned a living classroom where numerous hands-on learning projects could unfold. Martin started communicating the idea for the greenhouse to administrators and other teachers. Pomfret’s physics teacher Brian Geyer shared Martin’s vision and joined with him in spearheading the project. In May 2015, the two traveled to Longmont, CO to attend the two-day course on aquaponics greenhouse design by Ceres and The Aquaponic Source.

Over the next few months, the teachers learned as much as possible about passive solar greenhouse design, conducting site visits to other solar greenhouses in the area. Once they had a sense of the possibilities, they could clarify their own vision and goals, presenting a clearer concept to the school community.

Looking to involve students, Martin and Geyer created a greenhouse design course. Teams of students used an engineering design thinking model to identify the goals of the structure. They interviewed potential users of the greenhouse – including science and engineering teachers, the dining hall director, campus community service group – to solicit feedback. Simultaneously, the students were building support for the project, explaining the benefits to numerous stakeholders. After studying construction materials and techniques for storing heat, the students created scale models of the greenhouse design similar to that which would ultimately be built. 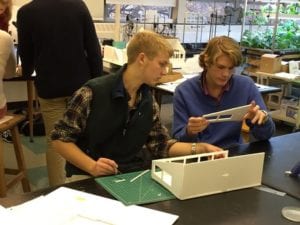 As students and teachers designed the structure, school administrators simultaneously fundraised for the project. To aid this process, Bill Martin created a short video, which shows stake-holders the main ideas and goals of the project, and explains the benefits of aquaponics and passive solar greenhouses. In total, the school raised $70,000 in grant money, as well as some funds from parents and alumni.

While it sounds odd to ‘brand’ a school initiative, this is essentially what teachers and students did in order to clearly communicate the project’s goals and generate support. Bill Martin facilitated a group of students who selected a name for the project, design a logo for it, and build a website to promote it – helios.pomfretschool.org. “This was a huge aid in sharing the idea with potential donors and our broader school community and beyond,” says Bill Martin. “It explained our plan to stakeholders and clearly showed people the benefits. Plus, it gave students another hands-on learning opportunity that was authentic and important to the project’s growth.”

With money raised, and the design finalized, Pomfret School applied for a building permit. Here too, students took an active part: they joined teachers and the structural engineers in meetings with the town zoning committee to present the project and gain approval. 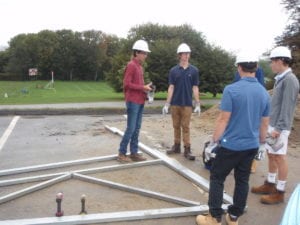 Students laying out metal framing sections of the greenhouse kit

Construction on the greenhouse began in July 2016. Students worked with guidance from teachers, a Ceres project manager and Pomfret carpenters to build the HighYield Greenhouse Kit. Students participated in every aspect of building the commercial greenhouse kit, including erecting the framing, installing the roof, and attaching the insulated metal panels. Here too, teachers Martin and Geyer made the construction process a part of the curriculum by creating an elective course around the experience, called “Engineering and Controlled Environment: Greenhouse Construction.” 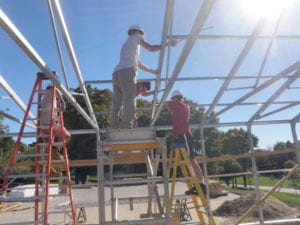 The greenhouse will be maintained by the collaboration of biology and environmental science classes and the school’s community service team. Since Pomfret School does not have an academic summer program, the plan is to shut down the greenhouse in May each year (with a giant fish fry!) and reestablish the aquaponic systems, starting in late August for the next school year.

Lessons for Designing a School Greenhouse

“The key to the success of such an endeavor is having one or two people dedicated to driving and steering the project,” says Bill Martin. “Then create an expansive network of partners at the school, both adults and students, to help execute the project using their particular talents.”

Collaboration between teachers, students and administrators were vital to the project moving forward. While students and teachers designed the greenhouse, administrators fundraised, each contributing toward a larger goal. This elucidates the importance of buy-in to the project. To have everyone working toward the same goal requires a clearly communicating the vision of the project, something the Pomfret teachers expertly did with the use of a video and website.

Another clear takeaway is the potential role of students. From the beginning, Martin and Geyer gave students the opportunity to direct and lead the project, making a school-wide, student-led effort. This broadened support for the project and expanded it’s learning potential. As the Pomfret School Greenhouse shows there are numerous vital real-world learning opportunities before you the hammer and nails out.

Another way to build support is to recognize all the ways a school greenhouse can be used. For example, at Pomfret, a biology class will be designed around the aquaponics and organic soil systems. Art students will create murals to cover the exterior of the north wall and the community service team will help manage the lettuce production and deliver greens to a local food bank. The full extent of the greenhouse’s planned impact is shown by the “Web of Influence,” created by students in the Fall 2015 Greenhouse Design Class, shown below. 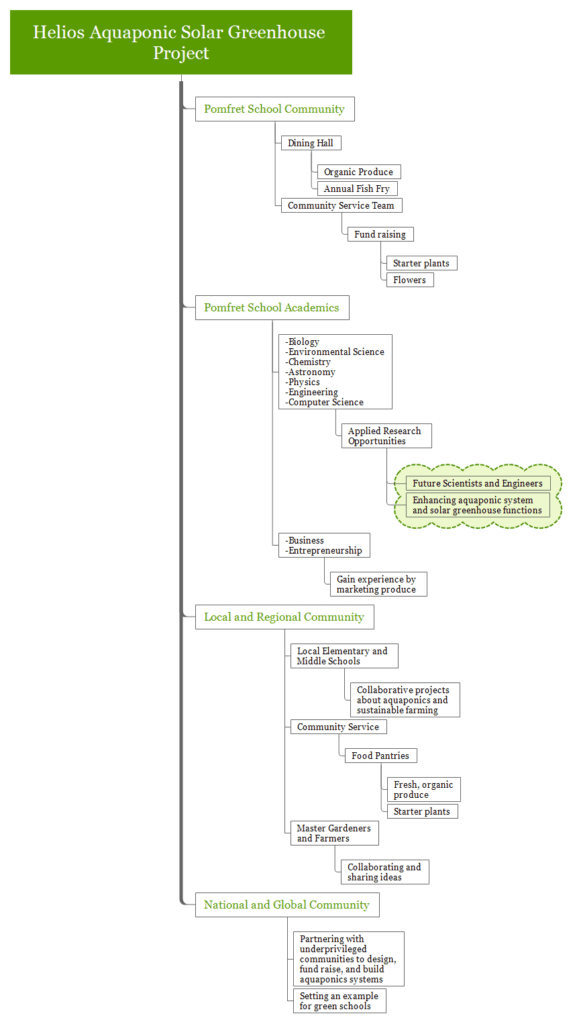 A Guide to Planning a Commercial Aquaponics Greenhouse

Debunking the Myth of the “Idiot Farmer”